WE HAVE FUNDED A ‘RISING STAR’

Board members recently agreed funding for a Wolverhampton ‘rising star’ to attend a youth conference in the USA.  Unfortunately due to the Coronavirus pandemic the event has been postpone until November 2021. In the meantime, Melvin Riley has come to the attention of a TV personality and has appeared on national television.  In this article Melvin recalls what happened. 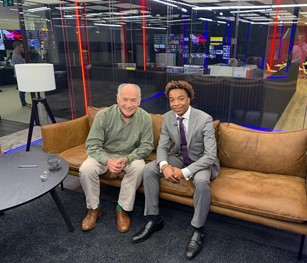 On the 27th of June, I had an interview with Alistair Stewart live on GB News featuring their rising star segment.

We discussed a range of topics from my work with the police and my role as a commissioner, where it started on the Jr safeguarding board and how I have evolved to where I am today and the barrier I possibly could have faced on this journey,

We touched on Brexit and major issues I believe the UK needs to tackle coming out of covid-19 which I stated youth mental health as it is the greatest challenge government, schools and NGOs have to deal with. The debilitating effects covid 19 has had on young people has exacerbated the ongoing epidemic facing young people right now. We as a generation have been affected the most by this pandemic

Alastair asked some tough questions about my future in politics asking me what political party I would affiliate myself with, and what successful public figures in society I would like to resemble, to answer the first question I don’t want to affiliate myself with a particular party as of yet as I need to get some experience working with each party. To answer the latter as an aspiring successful entrepreneur and political figure I strive to take influences from Robert f smith, Thurgood marshall &  jay z.

My highlight of the interview was discussing the stereotypes and issues young black males face in the UK. I believe being able to show a different narrative of a “young black male” being a positive role model in society and actively trying to eradicate the social-economic issues I and many people face is important.

Our conversation was eye-opening to see how the media and society perceive young black people and push the narrative that for us to be successful we have to go through challenging and troubling circumstances to come out on the other side of enlightenment, I feel like I addressed this by clearly showing I had no struggling by not being involved in gang culture, being a troubled child in school and many other serotypes.